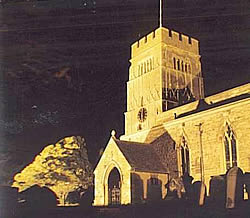 This parish covers 2,307 acres to the west of Wellingborough, with the village itself lying between the A4500 and the A45; the latter having relieved the village of heavy through-traffic and now providing speedier access to Wellingborough, Northampton and the major national routes Ml, A1 and A14.

'Beretun' was settled in early Saxon times, its name indicating a barley growing region. The prefix 'Earls' comes from a long association with the Earls of Northampton and Huntingdon, the Elizabethan house of Castle Ashby being nearby across the River Nene and the Bavarian-style 'mini-castle' of its north lodge also facing the village.

Traditional industries developed mainly from cottage industries. White Mills in Station Road were corn mills later used for cloth fulling as part of the cottage industry of cloth production which ceased in the 18th century . Rushmat and lace making were then successful additions to agriculture which, of course, still forms a major feature of the locality today.

Hide tanning was established by the 13th century, and this ancient tradition of leather processing only ceased as recently as 1984. By the 1780s the handsewing of boots was being carried out on workshop principles by small groups of men in outhouses and cellars. When the railway arrived in 1845 it brought about the gradual mechanisation of the boot industry. This saw rapid development of the village, including the building of New Barton in the 1870s and 80s. Ironstone quarrying was carried out briefly, and Silica sand extraction rather longer. Both these industries used a tramway system.

Industry in the village is varied, new small industries have developed most located upon a compact industrial estate on part of the former ironstone, quarrying area. These complement the traditional boot and shoe manufacture which still exists on a reduced scale. A new factory extension for 'Barkers' of Earls Barton was opened by HM Queen Elizabeth, The Queen Mother, in May 1987.

Post-war expansion brought many new families to the village, increasing the population to approximately 6,000 as it stands today, the excellent transport and communication facilities resulting in commuter housing built mainly on the former factory sites. The village has excellent Infant and Junior schools, and a branch library in the village centre.

The most famous village attraction is the acclaimed late-Saxon tower of All Saints Church, now floodlit. This listed ancient monument is built on a spur of land high above the Nene valley and is believed to be a former Norman 'mote and Bailey' castle, on the site of an Iron Age hill fort, and attracts visitors from all over the world.

There are other buildings of historical interest in the parish, mostly of local sandstone, some being thatched. The village has always had strong Nonconformist elements. The Baptist faith being fostered by William Carey in the late 18th century and Eli Tebbutt, a local man, was a founder figure of the Methodist movement. There are churches of both of these denominations in the village, and the Roman Catholic Church of St Anselm was built in 1970.

The village has an active social life, with many societies and voluntary organisations providing a variety of hobbies and interests, while a wide range of adult education evening classes are available at the school.

The Youth Club and Senior Citizens' Day Centre, located on the Recreation Field, was built largely with funds raised by villagers and these provide a major asset to village life. There is also a museum of shoe-making and local life based in the village. An annual Carnival is held in June, a Steam and Country Rally in August and village fireworks night in November.